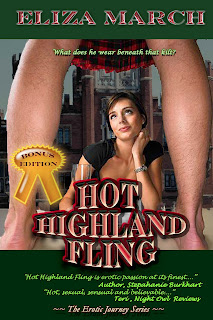 Free lance writer, is finished dating executives. She’s looking for hot sexual fantasies with a man who fits her needs... “All muscle, stamina and no commitment.” The assignment in the sounds perfect when she's assigned to interview an American who recently inherited lands and a title in . She tosses her inhibitions aside for the first Highlander she encounters—prepared to research all the old myths about brawny men in kilts and finally answer the age old, burning question: What does a Scotsman wear beneath his kilt?

represents everything Ailsa hates. He knows it's wrong to deceive her, but he can't risk Aisla discovering his true identity before he seduces her. If only he can become the lover she adores before the interview, perhaps he can convince her they're perfect for each other. He has one night to prove he's no stuffed shirt and three weeks to be everything she desires in a lusty lover. His adventurous lass is not only imaginative but willing.

Can lust turn to love in three weeks and will they be ready for more than a Hot Highland Fling when the assignment draws to an end?

“So ye don’t mind a man in a skirt, hey?”
The expression on his face turned predatory as he moved into her personal space. She felt like Little Red Riding Hood had come upon the very big, very bad , and she so wanted him to eat her. As far as she was concerned, he could have her all he wanted. The silence between them was charged with sexual tension.
“You look...ah, great.”
Ailsa’s gaze took him in again. She’d have to settle for great. Any other term would just be insufficient. Yet great almost seemed an inadequate description under the circumstances. Vocalizing her true feelings—terrific, yummy, fantastic—might be a tip off about her fascination with him and his kilt. She decided to hold it there. Anything other than great would be over the top. No sense scaring the hell out of the first man she encountered in .
She certainly couldn’t ask the question she longed to ask or lift his kilt and satisfy her curiosity.
He frowned and tilted his chin to one side, perhaps puzzled by her perusal.
She tried to explain. “Don’t get me wrong. I was surprised to see the native dress. You know...the kilt and all. Sorry, I’m babbling. I didn’t know kilts were daily attire.”
“Do ye have something against kilts, then?”
“Oh, no! Absolutely nothing. I actually have a certain proclivity for men in kilts.” The only thing she wanted against his kilt was her body. From the rising action going on under the sporran, she imagined he’d meet her sexual requirements, and then some. How well would he fill her? Her inner muscles clenched at the mental image.
His eyes narrowed and his nostrils flared.
“Do you, now?” suppressed the smile on his lips, but it crept into his eyes.
She played with fire, boldly flirting with him. “Yes, I do.” She lifted her chin defiantly and let her smile say...“Try me.”

I hope you benefit from my blog and thank you for commenting... 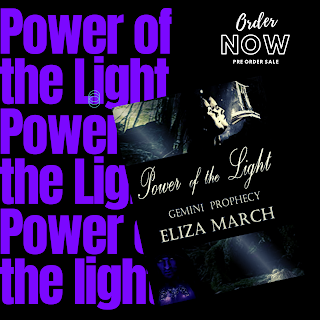 Sneak Peek  If you want me to keep you updated on the series you can sign up for my newsletter.  Click on the G EMINI EMBLEM TO SIGN UP In  the beg inning: Release of the Traigon – The Gemi ni Pro ph ecy On the night of the Gemini twins’ conception, Tapestry, the immortal white witch and gifted w eaver of lost souls, had been at her magical loom and and had woven their souls. One on one side of the ethereal fabric, and their true life mate’s soul on the other side. Like unto like, each a half of the whole, mirror images of the other. No one understood their true nature more than Tapestry, nor their weaknesses. E ach soul reflected but one side of the incomplete image. Each Gemini’s soul only held half of a whole power vested in the Gemini. Once each accepted their other half and embraced their gifts, claiming the full essence of their power, the fabric of their souls would be complete. Only then could the power of their assigned element be returned safely to the Stone of Fal. 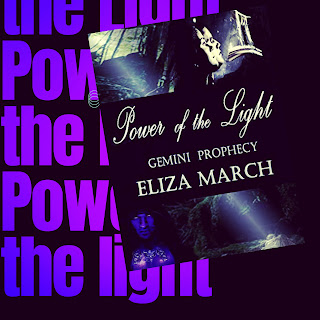 Damn the Darkness - Read an Excerpt

Read a new excerpt: If you read Conquer the Highland Beast you knew this was the inevitable conflict so here it is from Jackson's point of view. Book one,  Defeat the Darkness is available from all eBook retailers. Coyright 2015 All Rights Reserved Sang Froid Estate outside New Orleans A foreign scent in the air hit Jackson's senses like a sledgehammer. Every muscle in his body hardened. As if he needed any more stimulus. Fuck, what the hell is that? The scent was enthralling. Amazingly sensual. Totally intoxicating. Then he saw her. Stunning. Heart stopping. Radiant. A kaleidoscope of color. Her pale blonde hair was pulled back into a tight bun. Classy. One sexy loose curl fell at the base and seemed to tease him.  Sexy as hell. All that class and one wild curl. The smile on her pale pink lips was for him.  His reaction grew stronger as the woman came toward him. Then she licked those lush, pillowed lips, and pressure built in his groin. He