Posted by Eliza March at 6:43 PM No comments:

This was just a morning thought before coffee so don't get crazy on me.

I woke up thinking about the pets I've had over the years. I've had parakeets, and other birds.  Rabbits and Guinea Pigs. A big white Long Island duck I raised from a chick...or duckling I guess. But it was Easter back in the fifties before politically correct was a thought, and he grew and grew, and his flat duckling beak didn't grow into a sharp chicken beak, and his webbed toes just got bigger. There are extensive stories I can tell about him because he lived for a very long time.

As a young child I didn't have a dog, but I did have a few cats. I didn't get a dog until I was sixteen. He's another story. There were also a few experiences trying to keep goldfish alive. And a yard rescue or two of squirrels. Nevertheless the revelation that struck me was how all these various species managed to eventually integrate into our family. Socialize with us humans. They learned to put up with us, even managed to communicate what they needed from us. Managed to get the message across. I have to go out. I need water. Pet me. 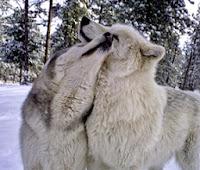 Dogs, birds, cats, racoons, squirrels don't have couches in the wild. But bring them into your home and they take it over immediately. Doesn't take long to domesticate a wild animal. As they become socialized they also become part of your family. You care for them, they reciprocate in some way.

Even farm animals acclimate themselves to the routines they form with the ranchers and farmers. Every thing and every one has a purpose. A place. When a baby is born, a new calf, a chick, a duckling, they become part of the new whole.

Why can't we humans get along?  I'm not a philosopher and there are people and animals I'm not fond of, but they still deserve a place to live in peace. Not on my couch, but they can live next door and get their own couch. I'll even help them carry it in.

Be nice if you comment. I'm seventy-one and I've seen a lot. I know this sounds like a naive  question...even
a ridiculous question, because if there's anything I'm not any more--it's naive. Just thinking aloud...
Posted by Eliza March at 4:05 PM 1 comment:

How Are Indie Authors Different? Sometimes We Wear More Than One Hat At A Time.

What have I been doing this week? Actually quite a lot.

Cyber Tracked got scrambled up in the Kindle World shut down. So details in this book had to be rewritten to establish it in its own world. I've been writing and formatting. I had to revise the cover too. The new revised edition is now available in ebook and for the first time...paperback...everywhere. My editor jumped in and did a final check to make certain all names and locations were correct. You can read it on your phone or Nook or Kindle or any eReader you like. So I can say...CHECK this book is complete.

While I waited on the final read I had some time on my hands so I began doing edits to make A Siren's Tail ready for the copy editor.

I always enjoy this process as I get to know my story all over again. I prefer to let the story rest for awhile before I do a wrap up. It gives the story time to gel and I'm not so familiar with the details that I can recite the sentences...assuming I've included certain words and nuances I meant to include.

Delia is a hoot and Frankie manages to keep up with her shenanigans. And Aelric is a romantic dream come true. I'm looking forward to writing the 2018 Christmas short story in this series Death By Mistletoe.

Many of my critique partners and beta readers have been waiting on this book for some time. I almost sold this series to a large NY publisher earlier in my career, but due to a weird set of circumstances it didn't come to fruition. Any author can tell you how disappointing rejection can be, but when the book of your heart is a series doesn't get rejected--yet never gets published--well, I have to say I was crushed. I put the series away and waited. I'm not certain what I was waiting for. I'd occasionally test the waters with a submission every now and again, but the world still wasn't ready. I thought I'd keep honing my craft and continue polishing it. So I waited and waited.

Now I'm ready and so is the book. I am not going to submit it again. I have faith in it and in my readers. It's a contemporary romance with paranormal and mythological elements. It's a mystery and a suspense. What if ancient evil walked the earth continuously reincarnating and becoming the serial killers, murderers, and totalitarian dictators memorialized as evil incarnate?

The Gemini Prophecy is a series of books about the ever present battle of good versus evil. Power of the Light is the first book, and I plan to have it ready for you soon.

Posted by Eliza March at 3:22 PM No comments:

Posted by Eliza March at 8:58 AM No comments:

Happy July - My Books on SALE

Posted by Eliza March at 8:46 AM No comments: