Writing romance...
Anyone who jokes about romance writing should try it sometime. In order to write romance, what many aspiring authors don't realize is that they may need to have at least two over-arcing plot lines; each containing GMC (goal-motivation-conflict). One is the romance plot and the other is the story plot line. There are some romance books where the purpose is singularly to tell the romance story, but many popular romances usually have a secondary plot. In mystery it's self explanatory - who done it? In romantic comedy it's the author's ability to place the romance in  a humorous plot. In paranormal romance the characters may not be quite human. The one thing all romances have or guarantee to the reader is a "happily ever after" or at least a "happily for now" conclusion. The hero or heroine can not die (unless they can be reborn - GRIN) and their romantic conflict should be resolved by the end of the book.

We imagine the HEA because romance authors don't go past the happy couple getting together and believing their lives will be filled with ...fill in the blank for what would make them happy. We don't go beyond having the baby and having all the friends and relatives around to help celebrate the happy event. We don't enter the realm of fighting over who's getting up to change the diapers or the exhausted parents' swollen eyes from lack of sleep.

No! We stop before the trouble starts. We leave the rest up to womens' fiction writers.LOL

Defeat the Darkness is now available in Trade Paperback and at a reduced price in eBook at Amazon.
Posted by Eliza March at 1:21 PM No comments:

Excerpts from Defeat the Darkness by Eliza March

This week my blogs are going up with excerpts from Defeat the Darkness at The Romance Studio. You can search for Eliza March  there or click HERE to go there.

How about I sneak one in here for my favorite followers?

“I have to go.” He patted Julian on the back. “Friends. Remember. If you need me, come get me. Keep watch over your family for now. Deal?”
“Deal.” The young man beamed with a huge grin painted across his face until he glanced over Kyle’s shoulder.
His expression went dark.
Kyle turned to see what or who turned the boy’s face so grim and noticed a woman dressed all in black silk. Her loose top draped over a long flowing skirt. The material seemed light enough for the climate, but the color blended into the shadows. Although she looked totally out of place in the muddy camp, she appeared comfortable in her skin.
“Strange. I haven’t seen her around, before. Who is she?” he asked, in almost a whisper, not really directing his question at anyone.
“The directress. She is in charge of the charity that brings the doctors here. I must go. She is mal noir, dark evil. Do not look into her eyes.” Julian warned with a hiss over his shoulder. He ran off into the jungle and left Kyle alone.
“Hey, Julian, be careful.”
How safe would the boy be out there? He dismissed his unease recalling the kid was a natural survivor, native to these jungles. Yet there had been rumors of jaguars hunting closer to the village since the earthquake and the mudslides, so a niggling worry remained. Between the rodents, snakes, and bugs, Kyle had enough wildlife right here in camp to handle without worrying about large jungle cats beyond the perimeter.
He rapidly walked toward the triage unit, glancing at the woman who’d stopped and watched him from a distance. He briefly thought the woman looked too perfect. Out of place. Overdressed. There wasn’t a raven black hair out of place in the swirled knots on top of her head. Not a bead of perspiration lingered on her upper lip, nor was there a spot of heated color tingeing her pale white cheeks.
Kyle knew for certain, if she’d been here in the village before, he would have noticed. Hell, a male would have to be blind or half-comatose not to notice her around camp. An odd mingling of lust and revulsion sent icy cold fingers up his spine and a hot tight grip around his dick. It didn’t feel right.
Kyle shook off the infatuation, more concerned than aroused when a rat scurried past his foot. Someone needed to stop the damned rodents from eating the provisions in the storage building before they took over the camp. The last thing the camp needed was the plague. He’d seen rat problems in Boston and New Orleans. Too bad the rats’ natural enemies weren’t doing their job.
He felt the hair on the back of his neck rise. The directress had turned her eyes away from Julian’s retreating form to stare back in Kyle’s direction. His pulse instantly picked up a beat as he met her swirling silver eyes.
For the second time, a shot of desire drove through him as he drowned in the woman’s gaze. She was beautiful enough to suck the breath out of any living male, and Kyle was no exception. His erection stirred back to life.
This was crazy. The days were long and grueling. Usually he was too tired and emotionally drained to think about anything besides the priorities—food and bug spray. A bath and clean clothes were necessities for sanitation purposes, but sleep—sleep was a luxury he’d trade his next meal for. Sex, even the idea of masturbating, seemed like too much effort most nights. Even if he’d never been celibate this long, he knew how to take care of himself. The few times he found the energy, he imagined Shelby when he did.
What was wrong with him? How did he even have the energy to lust after the first attractive woman he’d run across since he’d been here. He loved Shelby. He didn’t want this.
Nevertheless, the dark force affected him, aroused him. Albeit in a surreal way. Something about her made him think of down and dirty, take it to the mat, sex. He hardened when her eyes traveled to the bulge in his pants as if she knew. His erection quickly responded, lengthening, and a small amount of liquid seeped to the surface in anticipation.
A tight sensation, an unclean feeling like a hand moving up and down his shaft, made him want to vomit, as he stood transfixed, locked in place. The sensation behind his balls became an unbearable pressure, and he knew he was going to come like a middle-schooler while the woman watched. His lungs constricted as his orgasm threatened, and he tore his gaze from the bitch in black before he came standing in the middle of the compound, alone, with the dark essence of the woman focused on his soul.
Her eyes seduced him, coerced him. He’d been forced to respond to her and raped by her mind.
This is nuts. Crazy!
Julian was right. There was something sinister about her pale, exquisite perfection that shot right through him. He understood why the boy ran, but he had a job to do.
He shook off the experience and forced himself to move.
An intelligent grown man could hardly bolt at the sight of a beautiful woman, even if she did unnerve him to the core with her hypnotic stare and latent sexuality.
Perhaps his own reaction was what bothered him. The feeling of betrayal. The guilt for reacting to a woman he didn’t even know. He forced himself to think of Shelby, but he couldn’t get the directress out of his mind. 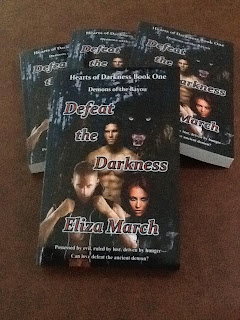 For those readers who still like the feel of a book in their hands Defeat the Darkness is now available in trade paperback from Amazon. Here is the link BUY HERE

The ebook is available from this link EBOOK for the rest of you who like the convenience of electronic reading.

What's the feeling among readers? The past two days I've been reading a paperback and I find I've become lazy about holding the book open, having good lighting, turning the pages. I can't part with my books though in case of a long power outage. I'm like an addict. I don't mind reading my books over and over again, but I don't know what I'd do if I couldn't read.

I do enjoy the convenience of electronic books. I have my phone with me all the time so my books are all synced on my Kindle app. I can pick up where I left off anytime anywhere. I never sit uncomfortably in a waiting room feeling as if I'm wasting time, not when I can answer emails or promote or read online.

Still there's something to be said for feeling the crisp clean cover and opening to the first page of a new world and diving into the fantasy. The kids may be nagging, the dog may be barking, dinner is in the oven and you're pouring the first glass of wine...go on. Enter the world in the book whether it's a paperback or electronic, let yourself escape and enjoy.

Posted by Eliza March at 9:15 PM No comments:

Press PUBLISH, PROMOTE, and PLOT the next book!

If we encounter an issue I'll help you out. Amazon is suffering from a few glitches today.

My new post is about what the author does once the publishing is done. Well, there is the promotional side of getting your book the exposure it deserves. If no one knows about it, they can't even go looking for it. They might be missing one of the best reads of their lives. (Probably are, too.) All because this essential step -- the dreaded promotion -- is skimmed over. As authors, we're basically introverts. (I've seen a few of you on FB and know this is not a hard and fast rule.)

Anyway, while you're promoting, there's no reason you can't keep thinking about your plot for the next book. You could even take notes or break up your writing time between promoting and writing the next book. Right now all I want to do is dive in to my next book in the series. But I can't. Once you have been living your life in your fantasy world, it's hard to come back to the reality of social networks and daily living.

Since the Kindle version of my book keeps fluctuating between being 'live' and going back to 'draft' status, my reality is temporarily annoying. I hope it will continue to be available through the weekend promotion. Such is the life of the self published author. Since I've done it both ways, I guess I'm considered a hybrid, much like my characters. Pass on your recommendations. I want you to know how very much I value your support. Thank you for all the kind and encouraging remarks.
~~~Eliza
Posted by Eliza March at 5:16 PM No comments: